Interior decorator Lisa Goulet can trace her interest in décor to her childhood, but it was the gutting and rebuilding of her family’s first cottage that encouraged her to follow her passion and turn it into a career.

That initial cottage was located near an eye-catching, newly-built log dwelling. Lisa and her husband Rick watched the building being construct-ed, and Rick was so impressed that he told Lisa it would eventually be theirs and, much to her shock, it was! They bought it six years ago.

Rick grew up in nearby Shawville, Quebec, on the same street as their current cottage on the Ottawa River, so sentimental elements played a part in the pull of the area. The impressive property offered a private beach, plenty of lawn space and expansive deck areas. But, the structure needed significant repairs indoors and out.

To start the rebuild, the logs were stripped, stained, sealed and chinked—a project that took two summers to complete. The original log deck railing was replaced with glass to lighten the look and enhance views of the water.

A rotting main-floor bathroom was redesigned by Lisa while Rick took on the task of doing most of the labour. The kitchen renovation came a bit later, offering Lisa time to tweak her plans and make sure she got things exactly the way she wanted them.

“The kitchen had been on our list from the moment I saw the home, and I planned it for years. It was completed in 2016 and I am still in love with it,” states Lisa, as she describes the detailing, with pride for her husband’s handiwork. “The base cabinets were all replaced and the island was completely changed, except for the original rock wall (composed of the same rock used for the fireplace and the walls that surround the property). Rick had to do some creative stonework for the new island, but it came out beautifully.”

While the cottage meets all the demands of this busy and growing family, it continues to be a work in progress. The master bedroom had a re-vamp, but several bedrooms are still calling for Lisa’s touch. Her personal design style combines natural elements with calm, soothing colours to create a comfortable space with creative flair.

“I love to add some touches of whimsy here and there,” she exclaims. Evidence of this is felt throughout with a mix of new, old and repurposed pieces like a table in the living area. “My maternal grandfather’s trunk, which he used when he traveled from England to India in the early 1900s, is now fitted with custom cut glass and used as an end table in the living room.”

With four grown children, (two now married) and a new grandchild, Lisa and Rick have a steady flow of company. The cottage is often a lively hub for family activities and hosting momentous events—both children were married there. But the grand log cottage also continues to serve as a retreat.

Lisa likes to spend time on her deck watching the Ottawa River as it flows right by her. “The river changes moment by moment, and I could listen to it and watch it and watch it for hours,” she muses. This solace offers her time to plan upcoming design projects and renovations to her own much-loved cottage, aptly named Woodhaven. 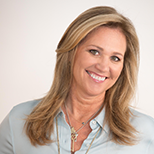