Tech at your fingertipsPublished on May 28, 2018

John King, a broker with Engel & Völkers Ottawa, and his partner Larry Mohr decided to move rather than renovate their older home, which needed extensive modifications to meet their demands. They found the ideal house in Ottawa’s McKellar Heights neighbourhood. While the home, built in 2003, was relatively new, they still needed to make some modifications to update the technology.

John and Larry worked with Signature Audio Video to modernize the existing wiring system by installing the latest Control4 technology and adding a Sonos music system. “Now we control everything from our smart phones,” states John, who admits that they have more to do to furnish their home with the latest gear. But now that they have everything in place, adding extras like an enhanced security system and controlled heating and lighting will be easy.

John believes that the luxury market in Ottawa attracts an educated buyer that expects a home to be technologically updated, no matter what its age. “It will increase the value and marketability of the home,” he confirms.

It’s not just the luxury market buyer that expects a house to be tech-friendly. It has become mainstream thinking that a home will offer a programmable thermostat and a properly designed network for managing multiple devices, explains Signature Audio’s Jon Van Wingerden.
“Most customers do not realize that the Internet router they received from their provider is designed to work with six to eight wireless devices as a maximum. In a typical home we exceed that with phones and tablets before even starting to add in smart devices.”

The time to bring an older home into the future is during the renovation process when walls are opened up and wires can be hidden with ease. Jon likes to point out to clients that wireless means less wires, rather than zero wires. “If a renovation is planned, we love to take advantage of walls and ceilings being opened to get the wiring infrastructure in place.”

Scott Parkes, Vice President of Tamarack Developments, says that new home builders are addressing the needs of this savvy generation of consumers. “We offer the latest technology and beyond. Each new Tamarack home has cabling that runs through a central hub, which allows for the future equipment to be run through this spot as well.” Scott offers that popular upgrades include whole-house wireless multi-point hubs, a lighting console and wireless heating and cooling control.

Beyond the basics, which include smartphone-compatible technology with personalized heating and cooling as well as wireless music, many homeowners are diving deep into sophisticated entertainment systems. Home theatres are becoming more popular as people are seeing the benefits of creating family entertainment within the home. Personalization is becoming more conventional so that each member of the household has the ability to control everything from lighting to music from their own device.

Both John and Jon agree that the most bang for your real estate buck goes into adding a programmable thermostat, a wireless music system and a tech-controlled lighting package. Jon adds that tech discretion is a must. “Most of our customers want to map out a way to hide the TV components and have better sound in at least one primary TV watching area.” Of course, all these devices are controlled at the tip of the fingers. 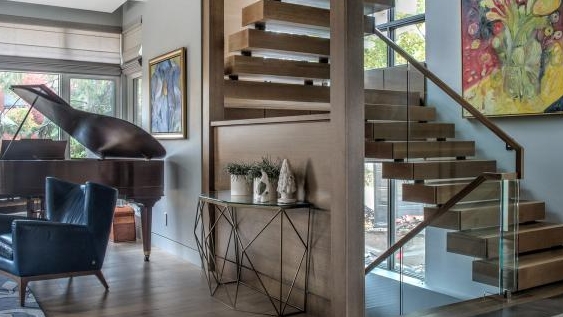